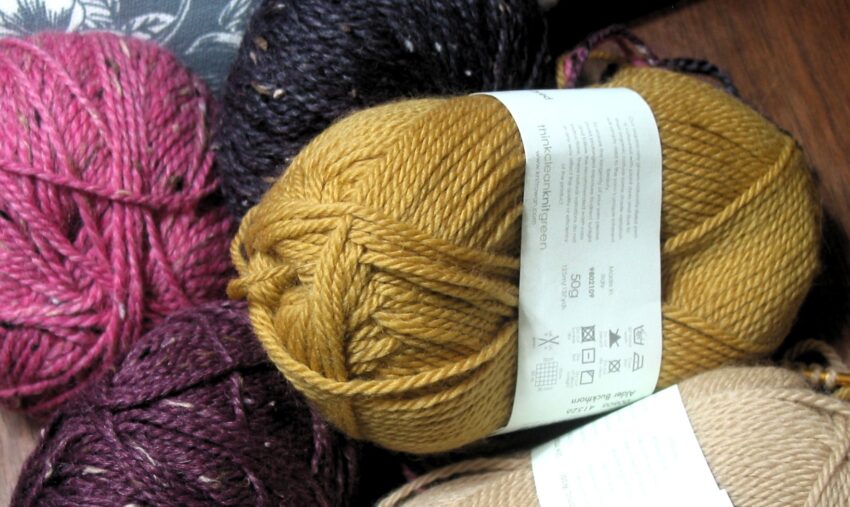 In my prior post, “My recent knitting — a raglan cardigan” (link at bottom), I wrote about the cardigan I’ve been knitting in order to learn top-down construction. Well, some things have changed since then.

Fingerless Mitts for Him

The raglan cardi has been on hold, for reasons I’ll get into below, and I had been about to start some socks to have something to knit in the meantime, had the yarn all ready to go, but that’s changed too. Right now, I’m preparing to make some fingerless mitts for my spouse. The other day he borrowed some of mine, which I rarely use and which fit me too loosely (and him too tightly), so that he could warm his arthritic hands and still enjoy playing his piano. After he tried my mitts for a while, he realized he wanted some of his own, in a color more suited to him, and without the lace mine have. He didn’t mind that they were wool, which he usually considers too prickly. He wants the warmth, and we’re having an unusually chilly winter even here in Southern California.

He wants a loose-knit fabric in a lightweight yarn for maximum flexibility, similar to that of the mitts he borrowed. So, fingering weight sock yarn will work best, but knit at a less dense gauge than I use for my socks. After swatching, I’m settling on a US 3 (3.25 mm) needle for the main part of the mitts, and tentatively on a US 1 (2.25 mm) for the ribbing, which we’ll try on him once I get the ribbing done on one mitt, in case a US 2 (2.75 mm) for the ribbing would be better. I’ll just consider the first cuff a swatch until we know for sure.

As for color, he was hoping for something variegated and sort of stripey, similar to my Red Wing Blackbird (Knitpicks Stroll Hand Painted) socks. But no red, please. He doesn’t like red. He wants blue. Black and blue would be great. I have some Knitpicks Stroll fingering weight sock yarn in black. “Would a royal blue or aqua work?” I asked. Nope. “Is there anything kind of like denim or blue-gray?” Not really, I thought. Not in my stash. Then I remembered I had some Lion Brand Sock-ease (discontinued) in Snow Cone, which is a medium-dark, blueberry-ish blue, close to denim blue, in color. He loves that blue, but it’s not variegated. Would stripes work instead? He was still thinking about the Red Wing Blackbird colorway and its tabby-like striping effect. I considered doing a random slip-stitch trick I’ve played with before, to mimic variegated yarn. But these two yarns are medium-dark and black. A little more contrast would be nice. I dug further through my yarn stash, because I remembered … something …

Two discoveries are making this sudden project incredibly fun. One is a YouTube video I found yesterday, by Roxanne Richardson, titled, How to Knit Fingerless Mitts Without a Pattern (link at bottom of post). Until then I was going to just wing it, maybe refer to a regular mitten pattern I have, and how I made my mitts years ago. But she goes into gauge, where to measure the hand, and calculations for the thumb gusset. It’s all there, everything I need to design his mitts.

The second discovery came this morning, when I remembered something about “Pacific” and then hit on what had been lurking in the back of my mind. Buried in my stash was a skein of a  Knitpicks Stroll Tonal in a colorway called Pacific (discontinued). I bought it thinking it would be more of a marine blue, but it’s very like a denim blue, with lighter tones like faded denim. I can’t wait to cast on, possibly tonight. I meant to take a picture before I caked the yarn, but next thing I knew it was wound. 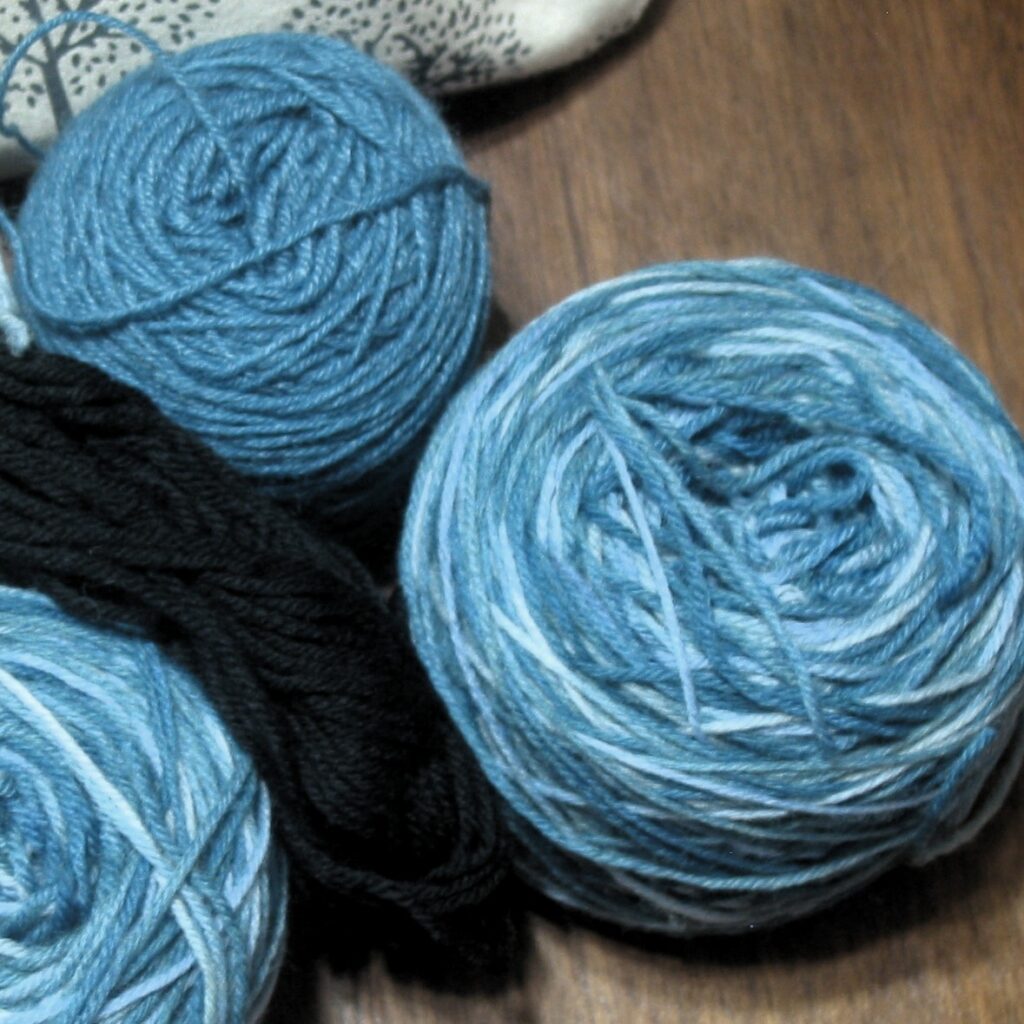 My Other Knitting and a Potential Frog

The raglan cardi I mentioned in my prior post is at a dead stop, for now, because I’m thinking of frogging it and starting over. It will be a temporary frog, so maybe I should call it a polliwog. When I started it, in a burst of enthusiasm over learning how to knit a top-down sweater, and how easy this one would be, I didn’t stop to really think much about my color scheme. Now I’m not liking the green stripe at all that i added to the first sleeve, and I’m wondering if I really like the color-block effect of the chestnut on the yoke and sleeves, and the variegated yarn below and on the ribbing. I think I’d prefer darker ribbing (the chestnut brown) and a variegated body. So I need to knit a swatch with that scheme and see how I like it. 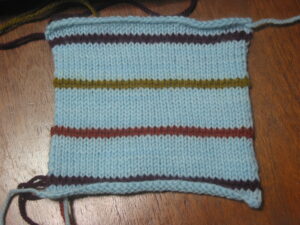 In the mean time, every time I see the Livresque Cardigan, designed by Naomi Endicott for Espace Tricot, I become more enthused about starting one. Perhaps I should I say my first one, because I have a feeling this is a cardigan that I’ll want more than one of. I worked up some swatches for color schemes as well as gauge, in two different weights of yarn that I hope to de-stash. One, the Brown Sheep Nature Spun worsted weight shown in blue (left) with some other colors striped in,  is a substantial worsted weight, so I’d have to make a lot of size modifications. Additionally, that particular blue, Bit of Blue, is all wrong for me, which is why I’ve had it in my stash for a long time. I love Nature Spun, my problem is only with this particular color, which I bought on sale somewhere and later realized it’s the wrong color for me. I think this yarn is going to go into knitting up some project bags, or something for the husband who loves blue, if he can handle the wooliness of it. 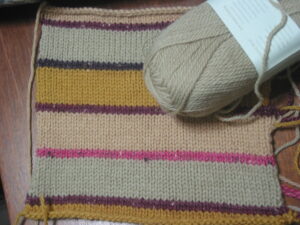 The other yarns I swatched with for Livresque are three colors of a discontinued Rowan yarn called Purelife Organic Wool DK, plant-dyed in colors Ivy, Black Tea, and Alder Buckthorn, along with Knitpicks City Tweed DK in Plum Wine, Brocade, and Rhubarb (the Rhubarb is discontinued). I decided before the swatch (right) was even off my needles that I would not include the Ivy, which is too cool a green for this project, which I want to be warm, autumnal colors. I went ahead and blocked that swatch to get my gauge, but I knitted up another with just the colors I plan to use — not blocked (below). 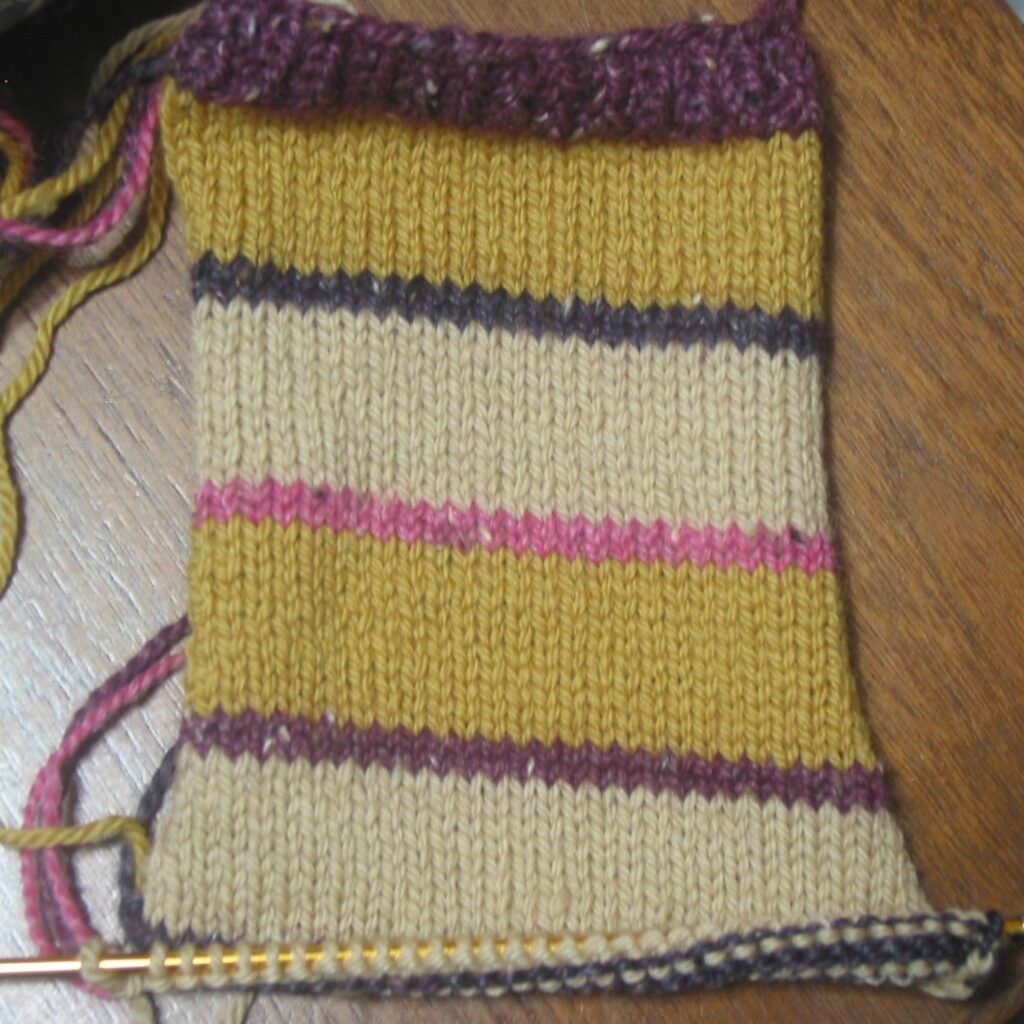 Much better. The Brocade is a dark, violet (bluish) purple, but it has flecks not visible in the photo of warmer reddish tones , so it does fit with the other colors.

I may knit the Livresque — French for bookish, by the way — even before I return to the other raglan cardi. At least this color scheme is a little better thought out, so I’m not likely to go cold on it in the middle of the knitting. 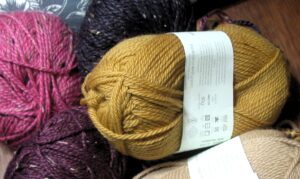 I’m linking below to a page on Ravelry showing the Livresque Cardigan, as well as to an Espace Tricot YouTube video in which Naomi Endicott wears her Livresque.

I had a dream one night a few months ago, about a silver gray cardigan with darker gray ribbing, and narrow stripes of dark gray and aqua. It was only after that that I came across this pattern, but I might later look for yarns in that colorway as well, to knit up a second one. I’ll knit this first one and then decide.

Happy knitting! Are you starting something new, rethinking a project, or dreaming up future knits? Feel free to share in the comments.

Links to Resources for How Knitting Plans Change

Swatches Yarns and Frogs: My recent knitting — a raglan cardigan (my prior post, mentioned above)